As part of the project to restructure the brands for Rachel’s Group, we also worked on the identity for the Group’s new Two Stories venue. This two-floor establishment is in Paris’ Saint Martin district, at 72 quai de Jemmapes, and the perfect place to discover New Orleans’ Cajun cuisine. On the ground floor is the PoBoy café. It’s named after the traditional American sandwich (which comes from Louisiana) as a tribute to the two brothers who invented it. They held a restaurant in New Orleans and decided to distribute the sandwich to striking workers free of charge during the 1929 crisis. At the time, they were known as the «poor boys» but this was quickly shortened to «po’boys». The best known variety is made with crayfish.
Freshly ground coffee, Rachel’s cake, home-made ice-creams, sandwiches and dishes of the day are served by the canal every lunchtime and evening.

On the first floor, the Nola restaurant and its jazz bar offer more elaborate dishes by the chef Ryan Pearson who provides a delicious, contemporary and elegant take on Cajun cuisine. The interior has been designed by the British design group, Alexander Waterworth Interiors.
As to us, we have created all the logos and identities (business cards, signs, menus, jazz bar mosaique, coasters, etc), selected and customised disposables (stickers, napkins, paper bags, etc), and are working on the website which is due for launch very soon!

What is Cajun cuisine?
Cajun cuisine (or cadienne cuisine in French) is a style of cooking named after the French-speaking Acadian people of Louisiana. It is a combination of French cuisine with Spanish, African and American Indian influences. It makes liberal use of spices, onions, capsicum, okra and celery. Seafood and crayfish are also staples. The sauces are thickened using ground sassafras, a traditional American Indian ingredient. 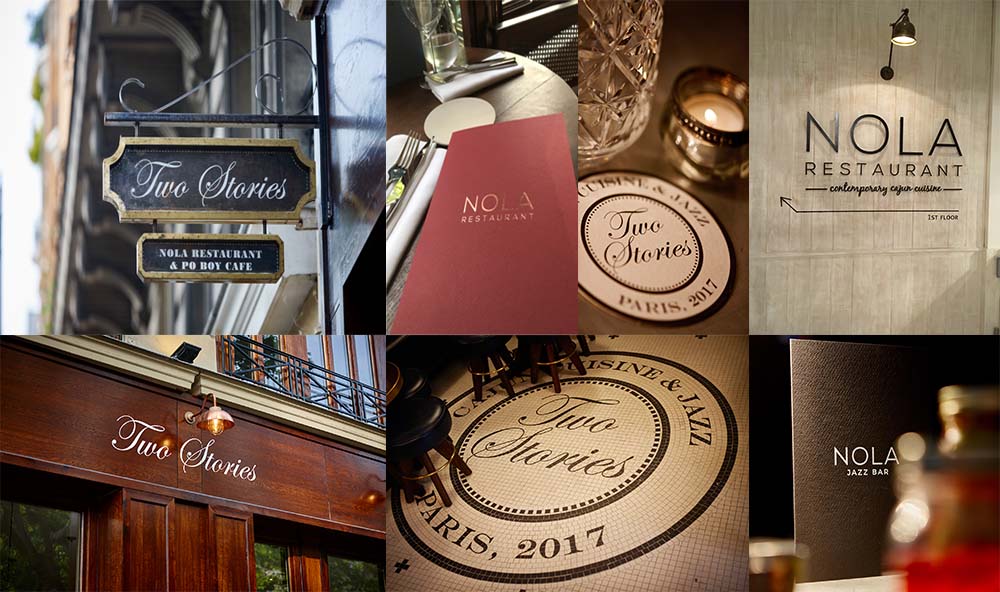